So . . . the first time I got into Betty, I was all a-twitter . . . jumped into the seat – pulled a lever – and the seat back IMMEDIATELY propelled my body and my head towards the steering wheel and I ended up with a giant knot on my forehead for the rest of the day [ugh double ugh]

It did make me realize, however, that there are other little tips and tricks about the seats that are now second nature to me, but it took me a while to figure out . . . and . . . it might be helpful to others if I share the details . . .

The first thing to note, is that the two front seats are mirrors of each other – so when I’m discussing the functionality of them I will refer to the outside and the inside of the seats.

Starting with the outside edge of the seats, closet to the doors you will find 3 knobs that rotate. The smallest, highest knob on the seat back, controls the lumbar function  [which, FYI, I did a happy dance after the first use]

If you reach along the underside of the front of the seat you’re going to feel a long metal lever. This controls adjusting the entire seat backwards and forwards on a slide. So you lift it up and hold it lifted while using your feet to gain forward or backward motion. Once you release it, the seat is locked into the position it’s in when released.

These are all pretty standard fare and are probably intuitive . . .

but the two front corners may be new to you, as they are actually levers that DO stuff . . .

The outside corner closest to the door is the lever that adjusts the seat back into a reclining position [or . . . if you’re not expecting it . . . propels you into the steering wheel before you know what’s hit you]. When you pull the corner up you release the catch [and the tension on the seat back] and when you let it go the seat will stay in whatever position it is in when released . . . to recline the back, you may have to exert a bit of pressure with your body/back to push it back while pulling the lever.

And the inside corner is the mechanism that releases the rotating plate to allow the seat to swivel around. Same pulling action as the other corner, but you only have to pull to release the mechanism and can let it go once you start rotating the seat . . .

You’ll probably hit a few things the first time you rotate the chair . . . so . . . keep in mind that the seat back should be upright to clear the doors / dash / steering wheel . . . and . . . if starting from a facing forward position, then you should pull the seat forward [with the long wire lever at the front of the seat base] FIRST and THEN pull the inside corner to rotate.

Note: if either of the seats are not locked into the forward facing position the vehicle will not drive . . .

and if you have been driving and then park, but leave the engine running and rotate the seat, the alarm will go off and NOT STOP [as in drive your dog to state of hysteria] until you rotate the seat back . . .

to avoid this. . . just turn the engine off after you park and then you can turn it back on and rotate at will without your seats screaming at you . . . you’re welcome [grin]

When I’m out and about and leaving Betty parked, I like to turn the passenger seat [and invariable keep the doggie bed in the way of it’s path] so that it may thwart, or at least slow down, a would be taker-of-other-people’s-stuff, because . . . well . . . it won’t drive when the seat’s not locked in place . . . [grin again]

I’ve probably told you before that I love the color of the seats because it helps keep the bright and airy feeling inside, but it seemed that

” EVERY TIME I used it for the first couple of months it POURED . . . not a little drizzle . . . but a manic, mud inducing, relentless onslaught of water . . .

These are the covers I bought to keep my sanity MayBron Gear Car Seat Covers . . .

They are neoprene and fit very well [please note that if you are odor sensitive you may have to wash these and air them out before use. I washed them twice and hung them outside for a couple of days to get rid of that neoprene-off-gassy smell.] These keep the wet muddy dirt off the seats and the dogs can come and go without fear of being chastised . . .

For the not-so-violent camping-with-furkids weather, I cover them with my TURKISH TOWELS that I love LOVE love [and use for EVERYTHING] . . .

And, being ever vigilant about maximizing our storage, I also tried a bunch of behind-the-seat-hanging organizers, but ended up preferring to use some headrest hooks instead. I find that bulky items hanging on the back of the seat can be problematic when rotating it, which I do A LOT . . .

It’s become a habit now that whenever I park, the passenger seat gets turned around to face the bench seat as it’s Alfie’s favorite spot and . . . on the rare occasion he’s in the mood to share . . . where I like to recline with my feet stretched onto the bench seat . . . [big smile]

*CrazyLadyCrankyDog LLC is a participant in the Amazon Services LLC Associates Program.  We link to items we like and earn a wee percentage of any purchase you make through those links. 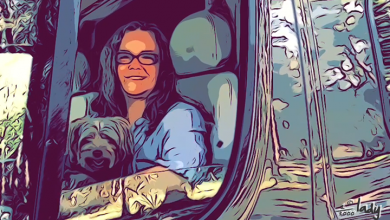 Bespoke on a Budget 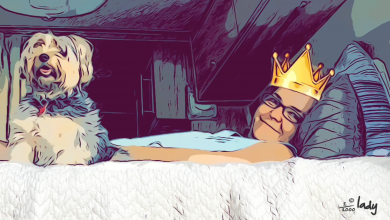 Princess and the Pea